Fortsätt till innehållet
First salmon of 2014! 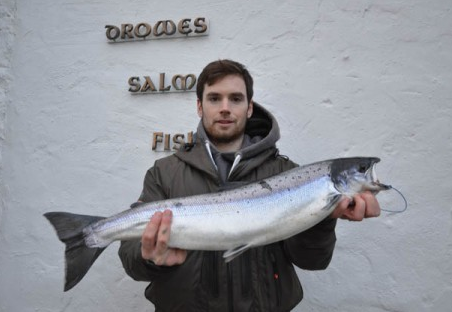 ”The first salmon of 2014 was caught on tuesday at 2.30pm on the River Drowes by Ballyshannon angler Eoin McManus while fishing the pool below Lennox Bridge on the Leitrim side of the river.

“To be honest I never expected a fish to be caught on opening day last Wednesday because of exceptionally high water levels, and I’m still surprised we managed one today” said fisheries owner, Shane Gallagher.

As a regular angler to the Drowes, Mr McManus recently finished college and found time to “have a go”, even in the poor conditions. “This is my first time to catch the first fish. I’m absolutely delighted,” he said.

The salmon will be served up to guests in the Fox’s Lair Restaurant in Bundoran by owner and chef Brendan Faulkner and all proceeds will go to charity.

The Drowes is just four miles long with almost 70 named pools, and flows from Lough Melvin in Co Leitrim to the sea at Bundoran in Co Donegal. The season for salmon and trout runs from January 1st to September 30th.”

Congratulation to the fisherman from us on fiskebloggen.com!

Tody its only 22 days until the openingday of the River Tweed. We will be back this year too and below you see 2 videos we made from these days.

After that we are going to RIVER DEE in the end of march so and if you are interested in fishing with us we have some rods left 24-29 march. mail: mattias@fiskeresor.nu for more info.